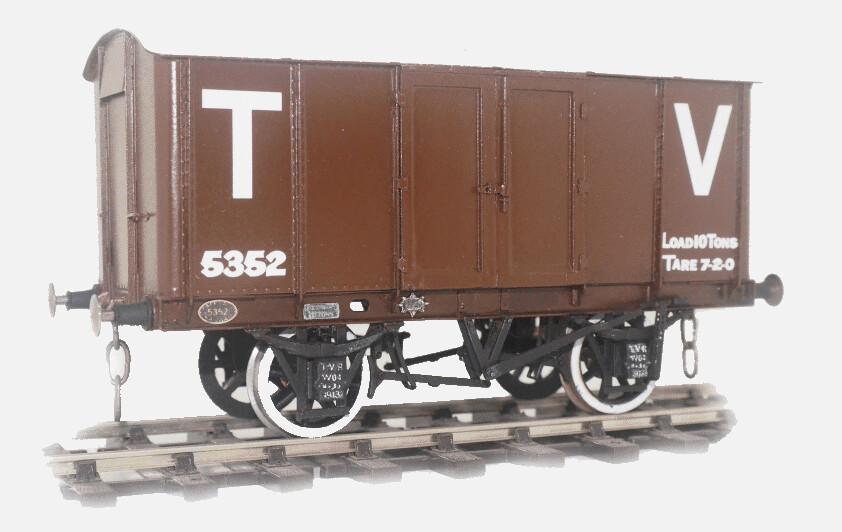 This kit is designed to represent the iron covered goods van or "mink" as constructed by the Midland Carriage and Wagons Company Harrison Camm Ltd. for the TVR from 1913. These batches were all constructed from conventional steel underframes as opposed to the pressed steel Fox underframes used by some other manufacturers.

From 1912 onwards TVR minks were supplied with double brake gear as standard.

There are a number of schools of thought concerning TVR livery. The demonstration build model has been painted using "Beech Brown" conforming to paint standard BS381C 490 as described by Nigel Digby (2). Other writers describe Taff Vale goods vehicle livery of this later period as being ""Brown" or "Brown Oxide"(3). In earlier periods, TVR wagons were described as being painted grey but this version of the iron mink would have appeared at the beginning of the brown era. Anything below the solebar would have been painted black and the roof painted white. Lettering (as included with the kit) consisted of a large 'T' and 'V' on either side of the vehicle door together with numbering and lettering as shown on the demonstration model. The lettering on the mink appears larger than the two foot lettering used on some vehicles during this era. Standard GWR livery would have been applied at various times post grouping and those that survived into nationalisation would have acquired BR numbers and possibly a lick of grey paint.An interesting photograph exists of a group of four wagons at Dymock, Forest of Dean in 1959 published in an article by the Welsh Railway Research Circle Archive. One of these wagons is a TVR Iron Mink with the remnants of the 'G' from 'GW' and fainter still, the 'T' from TV. Unfortunately no number can be seen however it makes an interesting comparison to the standard GWR v6 mink next to it together with introducing some interesting weathering possibilities for the post-nationalisation period.

Any further information is always welcome for potential inclusion in future releases of these instructions.