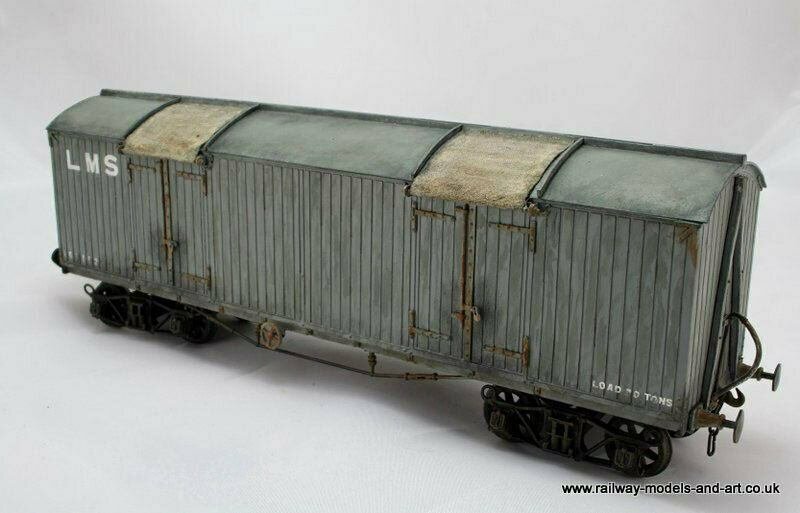 Introduction
In the early part of the last century, the L & Y embarked on a programme of rolling stock construction that resulted in some
unique vehicles. These were three types of 35 foot bogie wagons, a single plank, a high sided and a van, the latter being the
subject of this kit. All had bogies that swivelled to enable the wagons to be placed onto turntables, one bogie at a time, and
thus gain access to warehouses or other places that had restrictions that would otherwise prevent them from being loaded or
unloaded.
Acknowledgement
I must give thanks to Noel Coates for the time and trouble he has taken to research the prototype, and to clarify the General
Arrangement drawing used in the production of this kit, and to identify the differences between the drawing and what was
actually built! He has been extremely patient in answering the numerous questions that I have had, and without his efforts,
this kit would have been undoubtedly longer in production and possibly have never been introduced.
History
25 vans were ordered in 1904, to Drawing No.5274, Order R36, and were a development of 25 vans built to Order M33 in
1902, but with two sets of double doors per side, as opposed to the one set on the earlier vans. They were rated at 30tons, and
had an internal capacity of 2000 square feet, an enormous volume in comparison with contemporary vans on other railways.
They were numbered 31151 – 31175 and were vacuum braked to run in fast goods trains.
Livery was the standard L & Y grey with black underframe, lettering was l and Y in between the door, with the tare weight of
14.17.1 marked on the solebar underneath the left hand door on the right hand pair, and the loading detail ‘TO CARRY 30
TONS’ on the bottom side rail, on the right hand side. After grouping, they would have assumed standard LMS livery until
withdrawal.
Wheels
You will need special 2’6” scale dia. wheels for this model, Slater’s code 7136