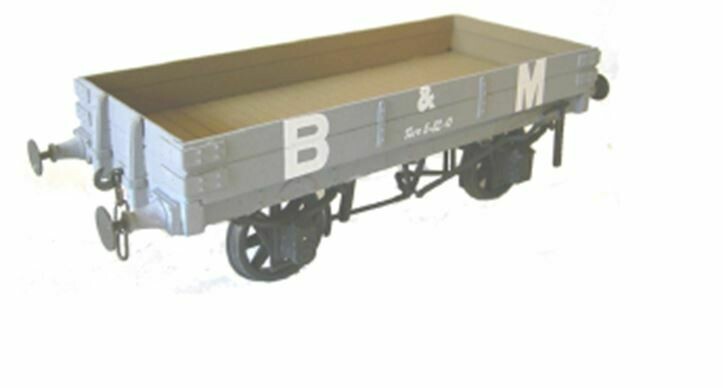 Requires wheels/couplings/paint and lettering to complete.

It has not been possible to establish a builder, date of build or withdrawal dates for these wagons, but I believe that they would not have lasted very long under the Great Western after 1923.

The only numbers that I can verify are 233 (via the drawing) and 429 (via the photograph), but the wagon was common on the B & M, as evidenced by several general photographs.

The photograph shows that different type axle boxes were fitted to that particular wagon, and two spare ones are included, of a different type, to enable you to follow Brecon & Merthyr practice, if you should so wish.

The Brecon & Merthyr wagon fleet was painted light grey, very similar to Midland grey in shade, with ironwork below the sole bar black. The size of the lettering has been variously stated as 18”, 22” and 24. After the grouping, it is believed that the Great Western quickly withdrew them, but any survivors would have been painted in all over GW grey.